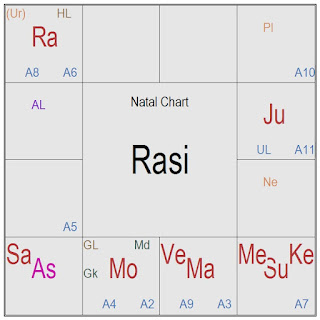 There is no second thought in saying that Abdul Kalam's was a unique personality.The values he stood for in his life,his broad inter-religious faith,his varied interests in fine arts,his vast religious erudition,his universal approach cutting across the barriers of countries and cultures - all this is well known to the world.I dont want to repeat all that again now.

Let me have a brief look at his chart to identify the planetary yogas that gave him such eminence.

He was born on 15-10-1931 at Rameswaram, Tamil Nadu.There are different views on his exact birth time.We have two timeslots available.One is 11.30 and the other is 13.30.So I am not going into rectification of his birth time, but will have a bird's eye view of his chart.

Jupiter exalted in a chart is always a very good yoga.This gave him friends from traditional but liberal Brahmin families in his childhood.He himself said many times that he learnt many things from this association.

Let us assume the Lagna to be correct as the chart is cast for 11.30 hours using Lahiri Ayanamsa.

Budhaditya Yoga in 10th gave him eminence in Education and conferred him with talents in music and literary activity.Third Lord Saturn in Lagna gave him industriousness,research oriented outlook and tenacity of purpose.

Aspect of Jupiter on Sun and Mercury gave him success in all the areas indicated by Budhaditya Yoga.The same Jupiter's look on the fallen Moon (with Neecha Bhanga Raja Yoga) gave him spiritual tendencies with lots of inter-religious knowledge.People say that being a Muslim he could remember Bhagavad Gita from cover to cover and quote its slokas at random.

With this brief analysis, let me now have a look at the relation between the transit and natal planets.

>>Transit Nodes are in reverse position as compared to Natal Nodes.

>>Transit Saturn is passing on Natal Moon now.We know that Saturn is an inhibitor and Moon indicates blood circulation.When blood flow is obstructed from reaching the heart due to any reason,it results in heart attack and death ensues.I think this is the cause of his sudden death.

Anyway, dying on an auspicious day like Sukla Ekadasi shows that he is a pious soul.

Let us pray for his soul to rest in peace.
Posted by Satya Narayana Sarma at 00:46 No comments: