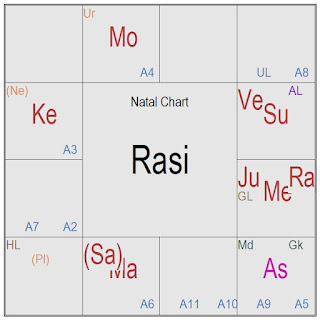 IAF-32 plane which had started from Chennai to Port Blair has been missing from last Friday.Search operations are on and nothing is found till now.Let me look into the issue with the help of Prashna.

Kanya ruled by Mercury is rising.This is a dual sign and shows the uncertainty prevailing over the issue concerned.In all Prashna charts Moon is the prime indicator of the issue on hand, as he signifies mind and its intentions.He is in 8th house of destruction from Lagna and indicating loss and destruction of the aircraft and death of all 29 passengers aboard the plane.

Moon is in Ketu star showing a sudden mishap beyond the control of pilot that had put the aircraft into an unexpected danger.Ketu signifies sudden developments which result in disasters.

Today is Wednesday ruled by Mercury.Lagna also is ruled by Mercury.Moreover the number of aircraft is 32 which when totalled gives number 5, which again shows Mercury. Now, this Mercury is in exact Rasi Sandhi between Karkataka and Simha rasis. As they signify water and fire,we can understand from this indication that the aircraft landed in trouble and plummeted into the ocean below.Mercury being the ruler of intellect, we can also surmise that the intelligence of the pilot of the aircraft did not co-operate with him in times of need, thus landing the aircraft in danger.

Sun hora was rising at the time of Prashna.Sun is a fiery planet located in Karaktaka, a watery rasi with Venus another watery planet.Moreover Arudha Lagna also is Karkataka.So this is nailing the issue as accident and watery grave.

Combination of Saturn and Mars in 3rd house shows technical snags in the aircraft.Saturn Mars combination almost always gives rise to accidents.This has been proved any number of times in the past.Watery grave is again indicated by this duo located in Vrischika a watery rasi.Rasi sandhi state of Mercury shows the unfit condition of the aircraft. 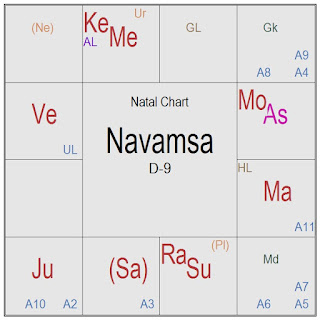 Let me now look at Navamsa chart which gives more clues into the matter.

By the above analysis, it can be surmised that the aircraft is not fit for flying and it was caught in a dangerous condition while on flight and plummeted into the ocean down below.

Lagna lord Mercury leaving 11th house and entering into 12th house shows the movement of debris from the place of crash towards the place of take off.

Now let us calculate the place of crash.

Lagna is Kanya- 23 degrees.
Accident site is Mars in Saturn star i.e Vrischika 3 degree.
Distance between Lagna and Mars - 40 degrees
Multiplying this with 8 which signifies Saturn we get 320.
Hence around 320 Km from the shore, in South East direction the debris could be found.

The hunt for the missing aircraft is on.

Let us await the result.
Posted by Satya Narayana Sarma at 00:08 No comments: