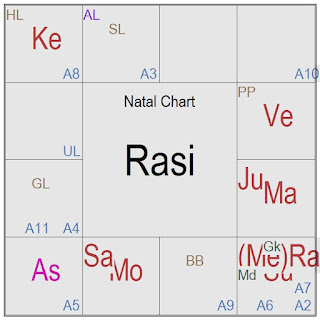 Let us look into this with the help of Prashna Jyotish.

The date of birth of Subhash Chandra Bose is very much available,but not his accurate birth time.Many astrologers of the past and present did analyse his chart according to their view points and derived many conclusions,some palatable and some not. Without going into these theories,let us look into this mystery through the microscope of Prashna Jyotish and try to arrive at the Truth in our own way as suggested by the heavens.

What are the questions that we wish to be answered by the stars?

1. Did Subhash Chandra Bose really die in a plane crash as we are given to understand all these days?

3. If he did not die in the plane crash, then what happened to him during his exile?

These are our questions.Now let us try to find answers with the help of the light of planets.

The Prashna Chart is erected at Guntur A.P,India today at 12.26 Noon.

The planetary positions are as under:

Now let us look into the Ruling Planets.

So, it all indicates that the secret lies in Saturn-Moon combination and Jupiter-Mars combination.The mutual angular aspect between Saturn and Mars confirms this conclusion.

Lagna Lord and ruling planet Jupiter is not connected to 6,8,12 houses but safely located in 9th trine indicating that Bose did not die in a plane crash as being propagated all these days in some sections. Jupiter's location in 9th along with 5/12 Lord friendly Mars shows he was captivated and imprisoned in a friendly country.

So,this indication disproves the popular belief which wants us to believe that the ashes stored in Renkoji temple in Japan belong to Bose.There is no truth in this popular belief.

4th house denotes country and 10th house denotes Government. Ketu in 4th house shows that the people of this country are fooled with a false propaganda which is contrary to truth. Rahu in 10th indicates that the Government had a role in this false propaganda.10th Lord Mercury is exalted but in retrograde condition in 10th house,showing the false communication supplied to the people all these days by powerful people holding power. Retro Mercury indicates false communication again and his exaltation as 10th Lord indicates rulers who are very strong.

Hora Lord Moon is closely conjunct Saturn indicating Bose spent his days in an underground cellar like jail.We know that the sign of Scorpio denotes cellars,underground hideouts and secret jails the kind of which were built by the Governments during war times.Saturn-Moon combination indicates depravity, loneliness, desolation and dejection.This Saturn-Moon yoga occurs in 12th house showing imprisonment and captivity again.Moreover,5th lordship of Mars and his friendship with Lagna Lord Jupiter suggests that the place of imprisonment is a country friendly to India in foreign relations.

Saturn is another ruling planet in our analysis located in 12th house suggesting that the last days of Bose were spent in captivity at a lonely place in an alien country.Saturn conjunct Moon indicates disappointment,mental depression and sadness. So Bose must have spent his last days in total mental dejection thinking about his country's sad plight.He must have been very much depressed over the failure of his mission to see India under the rule of a benevolent dictator.

12th Lord Mars aspecting Scorpio from 9th house indicates the ruler of that country is a party to all this secret plot to keep Bose under imprisonment till his death.

Ketu signifies Jupiter and is a lonely planet.He says that Bose did spend his last days in lonely gloom and mental depression in a distant land.

Now let us look at Jupiter and Mars.Mars is 5th and 12th Lord showing a secret plot again.Mars is a dictator.9th house shows a foreign land.So, all this indicates Bose did spend his last days in a country ruled by a dictator.Mars signifies red color.The ruler of 9th house Leo is Sun who signifies red color again.So in all probability, Bose must have been imprisoned in a country ruled by red color.

9th house denotes foreign country.Its lord Sun is in 10th along with Mars and strong 10th Lord Mercury who is retrograde.All this indicates that the rulers of the country where Bose was kept under imprisonment and the then leaders of our country were hand in gloves with each other.Retro Mercury shows that the intellect of our rules was over shadowed by personal considerations in doing injustice to Subhash Chandra Bose.

Let us look at Arudha Lagna which clearly and unequivocally decides things.

Lagnarudha is Mesha. Its Lord Mars is in 5th along with 9th Lord Jupiter suggesting that Bose was kept under custody in a friendly country, But Saturn-Moon combination in 8th house and mutual aspect between Mars and Saturn shows that all this is a secret plot and it is not a friendly hospitality but a benign imprisonment.

The dasa running at the Prashna time is Saturn/Venus/Sun.Saturn in 12th indicates imprisonment.Venus in 8th shows loss and failure.9th Lord Sun in 10th with Rahu shows the unholy alliance between two countries to keep Bose under imprisonment at a lonely and unknown secret place.

When all the planets are shouting at the top of their voices to the contrary, how can we believe that Bose died in a plane crash?Not possible.

It is very clear that gross injustice had been done by one and all to such a great personality like Subhash Chandra Bose who dreamed to free his country in a way he thought was best in his times. Going by the above planetary suggestions, I strongly believe that Bose did not die in a plane crash, but was captured and detained in a secret prison in a friendly foreign country till his death some years after.

I believe also that the sorry state of affairs through which our country is passing till today is the direct result of a curse that we inherited, a curse that resulted from silencing a pure,unselfish and powerful voice in a way that is most unholy and uncalled for.

There is an adage that says - 'The sins of rulers haunt their subjects'.

I think this applies to our country's state of affairs in toto.
Posted by Satya Narayana Sarma at 10:01 No comments: